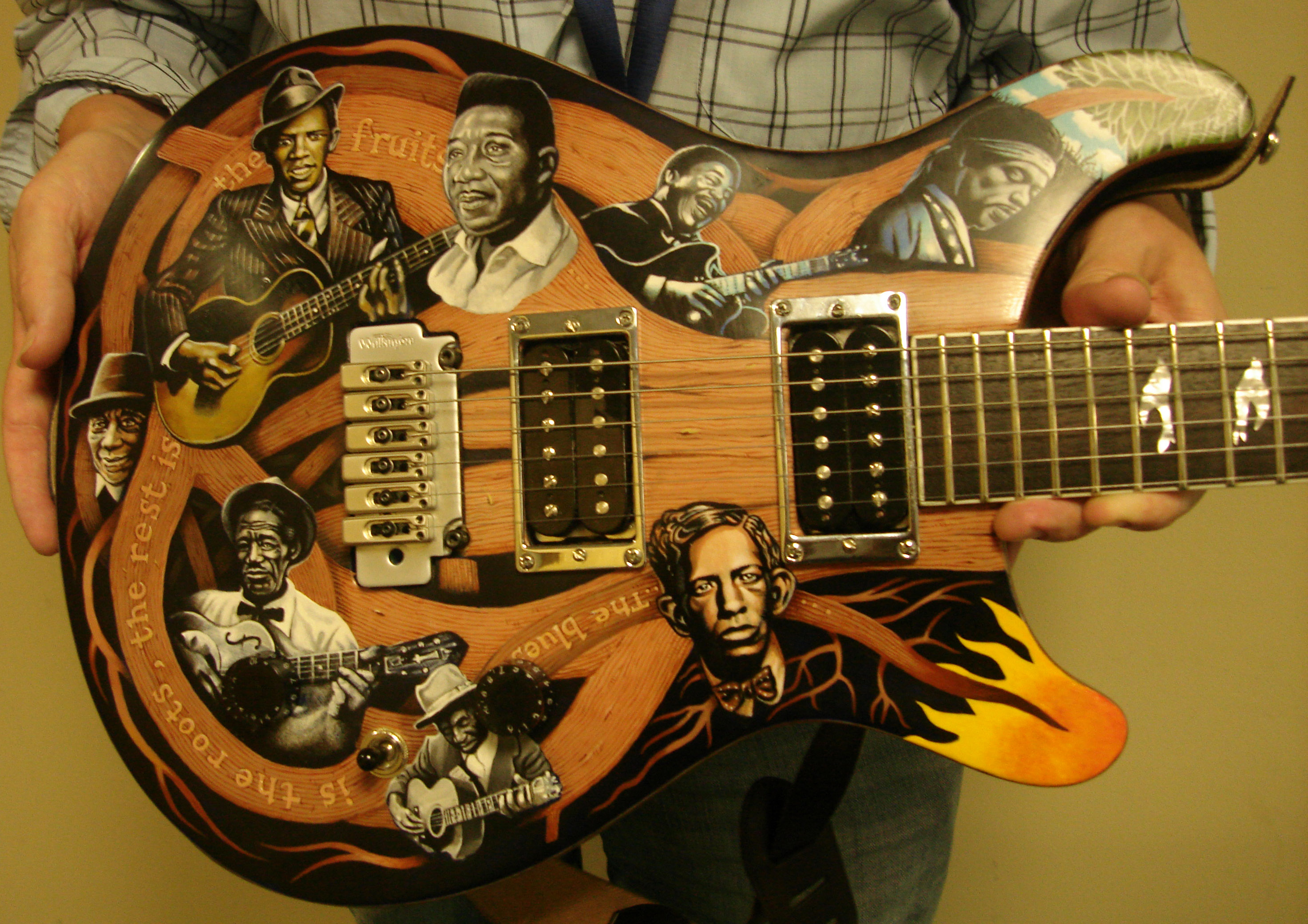 The Programme
Blues Week 2019 provides an opportunity for blues enthusiasts to come together for a full week of music making. It is a chance to broaden your skills and knowledge in a comfortable, relaxed atmosphere. The programme will offer morning and afternoon workshops and classes for all levels. The beginners class is for those who have little or no knowledge of their instrument. The intermediate and advanced classes are for those who already play to varying degrees of proficiency and are ready to learn new tunes, techniques and styles. The evening activities throughout the week will consist of a concert by the staff members, a student concert and nightly jam sessions.

The Classes
Classes will begin on Monday morning and run through Friday afternoon. There will be 2 sessions in the morning beginning at 9:30 and lasting until 10:45. There is a 20 minute break between each class and the second session will start at 11:05 and end at 12:20. Lunch is from 12:30 to 2:00. In the afternoon, the first class will start at 2:15 and end at 3:30. The second afternoon session will commence at 3:50 and end at 5:05. All classes and workshops during the week will last for one hour and fifteen minutes. The program will end after the last class on Friday.

The Staff
KENNY SULTAN, Country Blues and Bottleneck Slide Guitar
From Santa Barbara, CA., Kenny Sultan has been teaching classes, workshops, and seminars around the world for over 30 years. He has two Martin Signature Models to his credit, a 000-18KS, and a 00-18KS both patterned after his old 30's Martins. Kenny is also a National Guitar Endorsee, an author of 5 books, several DVD's, and an iPad App.

Advanced Country Blues Guitar (intermediate/advanced)
In this class, Kenny will look at the lighter side of the blues (ragtime, jug band, house party and Piedmont), and not just your standard 12 bar blues shuffle. The class will cover alternating bass, along with some brushing, strumming, and other techniques. His other class will focus on Texas style blues with a strong emphasis on Lightnin’ Hopkins. It will cover monotone bass in the key of E (with some A). For both of Kenny’s classes, he will take these styles and show you how to improvise over them with chords, notes and rhythm so you never play them the same way twice. He will show you how to make it your own.

Beginner / Intermediate Bottleneck Slide Guitar
This class is for students who have never played slide before, or have very little knowledge of how to get a decent sound out of one.  Kenny will start from ground zero, with all the very basic techniques.

BROOKS WILLIAMS, Country Blues and Bottleneck Slide Guitar
Brooks Williams, from Statesboro, Georgia creates a super-charged sound that draws on both his blues and Americana roots.  He got his start in the clubs and bars around New York and Boston and has recorded 28 albums.  Blues in Britain wrote that Brookes is "At the top of his game, setting new standards and a fresh direction for the blues.”

Advanced Country Blues Guitar (intermediate/advanced)
This class will explore some of the most classic songs in the country blues repertoire including, but not limited to, Lightning Hopkins, Pink Anderson, Etta James and Memphis Minnie. The songs will all be in standard tuning or drop D and are ideally suited for those who know how to do alternate fingerpicking.

Advanced Bottleneck Slide Guitar (intermediate/advanced)
For this class, Brooks will teach slide guitar arrangements of classics by such blues legends as Mississippi Fred McDowell, Blind Willie Johnson as well as more modern players like Ry Cooder and Bonnie Raitt. The primary tunings will be open G and open D. Guitar tab will be provided.

ADAM FRANKLIN, Bottleneck Slide Guitar and Mandolin
Adam Franklin is a superb exponent of blues and ragtime from a ‘golden age’ of American music. With a voice that is both powerful and soulful, his performances are intense, energetic and highly entertaining. In addition to guitar, Adam is a great blues mandolin player and will teach a mandolin class this year. Students are encouraged to bring their mandolin along.

Beginner / Intermediate Bottleneck Slide Guitar
In this class, Adam will look at all aspects of slide guitar, from the basic techniques and tunings to classic rhythms and licks of the innovators. The class will be studying the styles of Tampa Red, Son House, Robert Johnson, Blind Boy Fuller and more.

Slide Guitar Rhythm, Licks and Solos (intermediate/advanced)
This class will explore the importance of rhythm in playing licks, runs and solos. The main focus will be tunes by Blind Willie Johnson, Barbecue Bob, Curley Weaver and Tampa Red. Adam will also look at open tunings with songs by Charley Patton, Furry Lewis and others.

Blues Mandolin (all levels)
Focusing on the blue side of mandolin, students will learn classic string and jug band tunes as well as looking at playing in the ‘blues jam’ friendly keys of E and A.

ABI BUDGEN, Country Blues Guitar
Abi has devoted many hours to studying old recordings in an effort to capture and communicate the spirit of the original sound. Inspired by her passion, Abi has become recognised as a respected guitarist, performer and recording artist. She has been teaching blues guitar to all levels of ability for 11 years.

Beginner Country Blues Guitar (beginner/intermediate)
Abi will help students to master the basic techniques and characteristic sounds of country blues fingerstyle guitar. She will focus on songs and playing a steady groove.

MICHAEL ROACH, Country Blues Guitar and Vocals
Michael Roach is the Founder/Director of Blues Week.  Dating back to the early 1980’s, he spent several years learning directly from such well-known figures as John Jackson, John Cephas and Jerry Ricks.  With 7 albums to his credit and an instructional DVD (An Introduction to Country Blues Guitar), Michael is firmly established in traditional blues music circles.

Beginner / Intermediate Country Blues Guitar
Michael will be available for one to one and small group sessions for beginner/intermediate students who need some guidance in order to benefit from the classes on offer at Blues Week.  He will help students to develop at their own pace using simple practice techniques.

Blues Vocals (all levels)
Using a selection of songs as tools, students will be encouraged to find their true voice with showing you how to breathe while singing to produce a full tone and useful tips on phrasing. Be prepared to sing!

SONNY BLACK, Country Blues and Bottleneck Slide Guitar
Sonny Black first picked up the acoustic guitar in the late 1960’s after hearing ‘San Francisco Bay Blues’ by the great Jesse Fuller. He now performs a blend of roots music that includes fingerstyle blues, ragtime, old time country and original compositions and arrangements of classics such as ‘Tennessee Waltz’ and ‘Heard it through the Grapevine’.

Beginner / Intermediate Bottleneck Slide Guitar
Working from an open D tuning, the class will look at how to get a clear tone using a slide, chord structures, fills and tunes.

EDDIE MARTIN, Bottleneck Slide Guitar and Harmonica
With 15 acclaimed album/DVD releases, Eddie has been called “The Ambassador of British Blues“. He won ‘Best Solo/Acoustic Artist’ in the European Blues Awards in 2018 and has been nominated in several categories for the British Blues Awards including ‘Best UK Blues Guitarist’, ‘Best Harmonica Player’ and his songs have made it onto TV and film soundtracks.

Bottleneck Slide Guitar (beginner/intermediate)
Eddie’s slide guitar class will look at the styles of Son House and Fred McDowell. He will work through pre-prepared tabs and study videos to analyse the signature elements of their right and left hand techniques, picking patterns and percussive effects.

Blues Harmonica (beginner/intermediate)
Working through a course book, the emphasis will be on playing to get you through basic techniques (e.g. bending and trill) to more advanced techniques (e.g. tongue block) using jams, set pieces and references to masters such as Sonny Terry, Little Walter and others.

GRANT DERMODY, Harmonica
Grant Dermody is an innovative and deeply emotional harmonica player and singer. He is well versed in electric and acoustic blues forms and brings his own voice and style to each. He has a minimalist style and a huge tone. As a teacher, Grant is highly skilled at hearing where a student is as a player, what the next step is for them, and how to teach it.

Blues Harmonica (beginner/intermediate)
This class will focus on the basic skills needed for tone production with chords and single notes, improvising and playing time over 8 and 12 bar blues, and the beginnings of bending and tongue blocking.

Blues Harmonica (intermediate/ advanced)
One of Grant’s classes will focus on improvising and tone production. He will spend a great deal of time working on being able to hear and hold down a groove as a solo performer. His other class will look at developing repertoire that may not arise from the harmonica or blues world, and finding ways to incorporate the voice and harmonica to best serve the song.

WILL WILDE, Harmonica
Will Wilde picked up his first harmonica at the age of 16 and played it until his lips bled. He grew up steeped in traditional Chicago Blues. With knowledge and respect for the original masters of the instrument, his live show has been described as “A masterclass of blues harp playing, bar none.” (Blues in the North West).

Blues Harmonica (intermediate/ advanced)
Will's advanced class is for students who would like to improve on key skills such as tone, vibrato and bending. You will learn how to improvise and build your own solos using various scales and positions.

On Campus: includes all classes, activities, room & board £650. This year, we are offering an Early Bird Discount of £25 if full payment is received by the end of February. The discount is only available to full week on-campus students.

Off Campus: includes all classes, activities and lunch £425

Per Day Rate: includes all classes, activities and lunch £135

Space is limited and it is advisable to book early to avoid disappointment. A £250 deposit will secure your place.

Please Make Payment To: Euroblues Promotions Limited, PO Box 1333 Cheltenham GL50 9AS United Kingdom. We accept payment via online bank transfer. Our sort code is 20-20-15 and our account number is 60473928. We also accept PayPal and the address for payment is info@euroblues.co.uk.

A parent or responsible adult must accompany all students 16 and under. If you know of someone who qualifies or have a family member that you would like to bring along, please contact us for immediate consideration. This scholarship is only available to first-time participants.